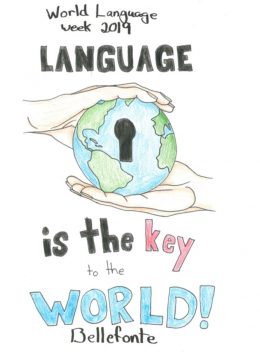 As they do every year, students and teachers in Bellefonte Area High School’s world languages department are celebrating World Language Week during the first full week of March, as part of a larger national observance to promote languages used around the world. It’s a continuation of a celebration from the month of February that recognized Discover Languages Month.

According to student spokeswoman Gretchen Little, of Spanish Honor Society, morning announcements were used at the school to help spread the word about different languages. Each day, she said, a “fun fact” was included about languages such as Quechua, Papuan and Urdu.

This is the sixth year BAHS is celebrating the week that’s also known around the country as National Foreign Language Week. They also aim to promote the education of a new language that is not taught at the school.

And with a T-shirt design submitted by Spanish 2 student, sophomore Kimberly Conway, her winning design depicts this year’s theme, “Languages are the key to the world,” that will be seen around the school. French teacher Brittany McCamley said the department annually takes design submissions from language students. This year, there were 11 submissions. Dustin Waltz was the designer of last year’s image that incorporated the theme, “Languages lead us on a path to understanding other cultures.”

“While all the festivities are enjoyable for the students, the Spanish Honor Society loves any opportunity to spread world cultures to the school,” Little said.

“World Language Week is a great opportunity for the society to learn about new languages and cultures that are prevalent in the world.”

One of the goals of Spanish Honor Society is, not only to promote the Spanish language, but also to appreciate other cultures and languages. The high school languages department also annually celebrates the national commemoration to better promote world languages.

According to the official AMG website, National Foreign Language Week was inaugurated in the Spring of 1957 by Alpha Mu Gamma. In Pennsylvania, foreign languages are referred to as “world languages,” therefore why Bellefonte Area High School celebrates what they call World Language Week.