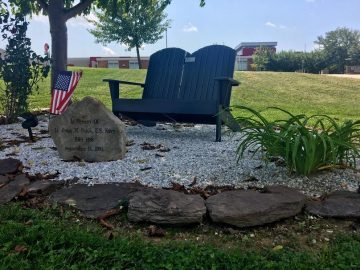 Bellefonte Area School District colors are red and white. It also supports blue – Navy blue, to be specific – to honor and remember a 1993 Bellefonte Area graduate who died in the Sept. 11, 2001 terrorist attacks at the Pentagon in Arlington, Va. That’s why a bench, painted blue, was erected outside the Bellefonte Area High School building in memory of Navy Lt. Jonas Panik, of Mingoville.

Several memorials in his name can also be found around schools within the district. The Lt. Jonas Martin Panik USNR Scholarship Award was also created by his parents and given to a Bellefonte student who plans to pursue a military career as an officer by attending a military academy or an ROTC program at college.

According to the National 9/11 Pentagon Memorial, Panik, who graduated from the United States Naval Academy in 1997, was “an outstanding intelligence professional, a true shipmate, a great friend, and a devoted and loving uncle, brother, son and husband.” He’s still remembered as an outstanding student, athlete and citizen.

American Airlines Flight 77 was the third plane to have crashed into a target on Sept. 11, 2001 – that time, 9:37 a.m., the Pentagon, headquarters of the U.S. Department of Defense. As part of terroristic aircraft hijackings by Al-Qaeda, five hijackers also crashed American Airlines Flight 11 at 8:46 a.m. into the north tower of the World Trade Center, followed by another five highjackers who crashed United Airlines Flight 175 into the south tower. The Pentagon attack came next, 34 minutes later. A fourth flight, United Airlines Flight 93, crashed at 10:03 a.m. in Stonycreek Township, Somerset County, about 100 miles southwest of Bellefonte – after passengers fought four hijackers believed to have wanted to target the Capitol Building or White House.