Senior becomes Eagle Scout after longtime dedication to the program 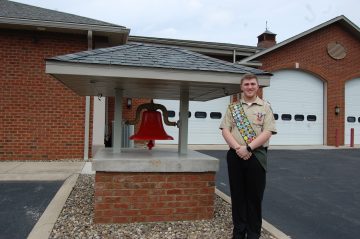 Being a part of the scouting programs such as Cub Scouts and Boy Scouts gave Bellefonte Area High School senior Brandon Snook an experience he may not have had otherwise. In the summer of 2015, he was able to attend the Philmont Scout Ranch in New Mexico that allowed him to enhance his survival skills, while also offering him the opportunity to see a place he’s never been to before.

This school year, Snook was officially named an Eagle Scout – the highest rank a member of the Boy Scout program can achieve. He said it was made official on Nov. 26 and followed by a ceremony on March 31. Now, he can come back to the program to work as an assistant Scoutmaster. Snook said he plans to continue his work with the same troop he grew up in – Troop 370, of Bellefonte.

“I’ll enjoy that because I’m able to offer my knowledge and skills gained over the years I’ve been scouting,” he said.

Snook’s journey with the program came in 2010, starting in the Cub Scouts before transitioning to Boy Scouts about two years later. While gaining 43 merit badges and other rank advancement, he eventually got his life rank, which allowed him to begin working toward becoming an Eagle Scout. One of the requirements included completing a community service project.

Snook said he restored an old cast-iron bell that once belonged to a former hotel in Pleasant Gap and was later donated to the fire company, which has been there for about 40 years.
“They weren’t really doing anything with it and I saw the bell as a bigger project because it had bigger meaning, not only to the fire company, but also to the community as a whole,” he said.
Snook restored the 230-pound bell, and built a brick structure around it with a roof, shingles and lights. He said the bell is becoming a staple to the firehouse on Robinson Lane, and can also be used for memorial events.

Snook plans to attend Penn State in the fall to study cybersecurity analytics and operations at the College of Information Science and Technology, and hopes to be a part of the drumline in the Blue Band.