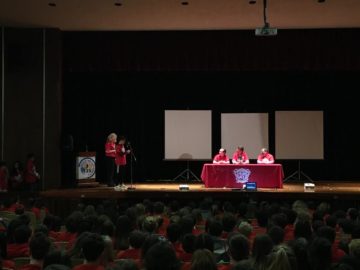 The goal of ARISS is to promote STEM subjects like science, technology, engineering and math, and encourage student participation to help prepare for the event.

A handful of middle school students had the chance to ask astronaut Scott Tingle about life on the International Space Station through amateur radio contact set up at the middle school by a group of community ham radio operators including Jon Guizar and Ellwood Brem. Leading up to the Monday afternoon event, students in Jordan Eccher’s class worked to help build the base of the antenna that was installed on the roof of the middle school building. Other students participated in space-related curriculum in science class, and art projects to create a T-shirt logo for the event.

Principal Sommer Garman said BAMS in Space-related curriculum will also continue after the event, which includes earth and space studies in sixth-grade science classes, and follow-up conversations about the event at all grade levels.

“It was really exciting,” seventh-grader Davis Corman said. “I was really looking forward to this and just hear an astronaut because he’s so many miles away from us in space so it’s very unlikely to connect with him. … We were able to hear the astronaut, which to me was cool (because) the moment his voice came on it was like, ‘wow this is actually happening’.”

Classmate Cecilia Mazzacco was one of the few able to speak to Tingle. She said she asked if he noticed behavioral changes while in space and if he had any coping mechanisms to handle that, which Tingle replied that though it is very calm in space, the biggest difference is the environment, which astronauts are prepared for.

According to individuals who digitally contacted the district, some heard the radio communication among BAMS and Tingle in areas such as Arizona, North Carolina and Virginia, and at least as far as Modena, Italy. Members from AstronautiCAST, a live podcast from Italy, contacted the district to say they heard the communication all the way from their location in Europe.