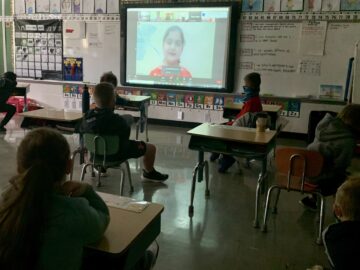 At the Maharaja Agrasen Public School in Dehli, India, students are still partaking in remote learning due to the pandemic. But it’s not stopping them from spreading education about just what they’re up to, with the rest of the world, in addition to sharing their culture with others.

On November 15, second grade students in Lata Anantheswaran and Nicole Harris’ classes at Benner Elementary School logged onto Zoom to have a live conversation with the second-graders and their teacher from nearly 7,400 miles away.

“We found out about it on Facebook,” Anantheswaran said about connecting with the class. “I sent her (the teacher) an email about wanting to join and she sent me a Zoom link. … Most of the schools there are still virtual because of COVID and have been virtual for two years.”

The students from India shared information about food, music, culture and other traditions from their homeland. Many students even performed native songs and dances. Benner Elementary students then had the chance to ask questions in return, and discuss the Indian culture as a class, which Anantheswaran said she’s been incorporating by teaching students about Diwali and other holidays from different cultures throughout the year. Diwali is a five-day festival of lights, which also coincides with harvest and New Year celebrations. This year, it was held November 4.

Giving the activity “two thumbs up,” Avery McMurtrie said he was most interested in attire the Indian students wear, which their teacher responded that there are so many different religions, traditions and festivities in the country that require different clothing based on a person’s culture and community. Something common, she added, was the use of a “bindi” or colored dot on the center of a person’s forehead. She also said that each state within the country speaks a different language and has its own culture, however the most common languages are Hindi and English, and include more than 400 native languages.