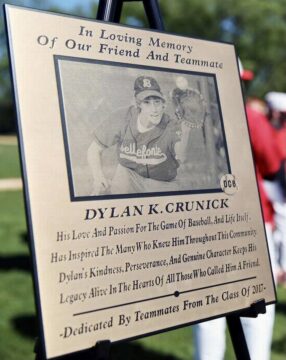 In memory of former Benner Elementary School student Dylan Crunick, the school raised money to put toward the DC8 Fund that provides funding for childhood cancer research, supports local families affected by pediatric cancer and awards scholarships to graduating seniors who value the same qualities as the student its named for.

As of September 30, Benner raised $785.68 with more donations coming in toward its goal to reach $888. This also came during the same month dedicated to Childhood Cancer Awareness. A fundraiser was also held last year.

“We want to remember and honor Dylan with efforts that will help build awareness of childhood cancer in a developmentally appropriate way,” Principal Dan Park said.

Dylan lost his battle with cancer in 2014 at the age of 15. He was a freshman at Bellefonte Area High School.

During the last week, a theme was picked each day for some fun and motivation in helping reach the goal. It included pajama day, hat day, sports day, Bellefonte pride day and dress-up-for-Dylan day.