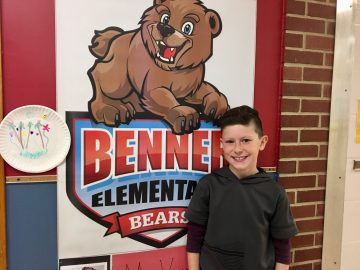 Joey Swentosky is only in fourth grade, but he knew at an even younger age that he wanted to be someone who helps put a positive spark in the lives of others. That’s why the Benner Elementary School student has been holding annual collection drives for the past three years to benefit the FaithCentre food bank in downtown Bellefonte.

Last year, he set a goal to collect 100 pounds of food. This school year, he hoped to exceed that, which, by the holiday break had collected 104 pounds from donations made at his school and around his neighborhood. He also plans to hold another drive in the spring to collect 300 pounds of nonperishable items to help offset the lull in donations this time of year.

“I really like going around and giving stuff to people, and I like helping other people out because everyone deserves to have a really nice life,” he said. “Some people have it more than others and if somebody doesn’t have that, they should, so you just need to donate so they can have a nice life and it will make the world a better place.”

Joey’s inspiration to help others came when he was a second-grade student in Nicole Harris’ class participating in the annual Jump Rope for Heart event, which promotes a healthy wellbeing, while raising money for the American Heart Association.

Joey said he then went to his mother Becky Swentosky with some ideas on how to give back to the community and decided to support the food bank, along with collect toys for those served by the Children’s Hospital of Philadelphia. It also opened itself up to a learning lesson about thanks and giving, as he held the drive in November during Thanksgiving time.

All donations were then delivered to the food bank just before Thanksgiving and learned that they’re most in need of items such as pasta, cereal, canned food and peanut butter.
“The people there are so nice – like the nicest people in the world – and are so thankful,” Joey said. “That’s why I’m so inspired by them because they take the time to work there when they don’t even need to, and it’s nice to know a lot of my hard work is paying off to help them.”

Joey holds the collect drive at Benner Elementary School and travels his neighborhood on bike working with neighbors to collect goods.