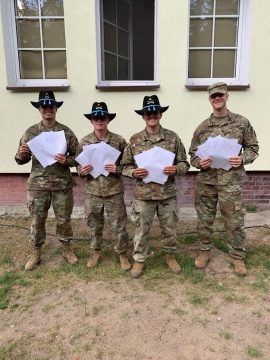 At Benner Elementary School, some local veterans stopped by the school to speak with students, and partake in a luncheon and ice-cream social during Veterans Days events

In Nicole Harris’ second-grade class, students read books about members of the military and their families, and then wrote letters to those deployed overseas. Among those they wrote to included a former Benner Bear who is now serving in Poland and Principal Kris Vancas’ daughter who is stationed in Romania. It’s something Harris annually does with her class to let those deployed know others are thinking of them. This summer, service members received letters that they shared among each other from Harris’ students.