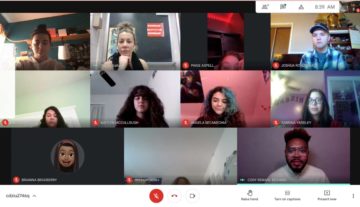 After Texas native Richard graduated from Webster University in 2010, he moved to New York City to pursue a career in stage management. He shared with students his determination to “ask and let people know of your sincere interest and availability.” Richard also believes in “abundance” and that opportunities will always arise, and they did.

One of Richard’s most unique experiences was serving as the production stage manager for Freestyle Love Supreme, a freestyle hip-hop performance featuring fully improvised musical numbers based on audience suggestions. There was no script and each night there was a new guest.

Director of Truman Drama Tracey Gatte said that students appreciated that he was honest about the stress and responsibility throughout his career. They also enjoyed his funny anecdotes about some very well-known Broadway productions.