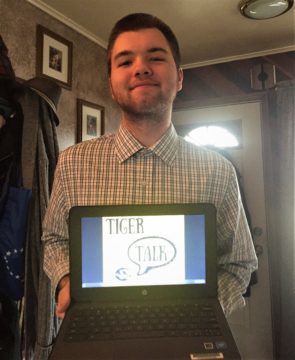 Having released three episodes since its debut in October, Tiger Talk covers a variety of subjects that are relevant to BTSD, including discussions on how students have had to adjust in response to the COVID-19 pandemic. Tiger Talk is a podcast for the school district, by the school district, and it is available to listen to on Spotify.

“I am very excited and honored to be the inaugural host of this podcast,” said Rosenthal. “It’s my hope that this podcast will help amplify the voices of students and staff within our school district, as well as provide our guests with an outlet to openly express their thoughts and feelings about their education.”

On the first episode of Tiger Talk, Rosenthal discussed social and emotional learning with Audrey Flojo Colletti, the state and federal programs coordinator at BTSD. In the subsequent episode, he had a conversation with two students from Truman, junior Elaina Kaess and senior Ryan Vogt, about their opinions and concerns regarding virtual learning. As a continuation of that episode, Tiger Talk opened its platform up to submissions from students at the elementary and middle school level, resulting in a special episode that featured voices throughout the district.

“Being able to lead this podcast has been such a great experience,” said Rosenthal. “I’m glad that I can be a part of what will hopefully become a distinct aspect of the district in the future.”