Class connects with peers from across the country in valentine exchange 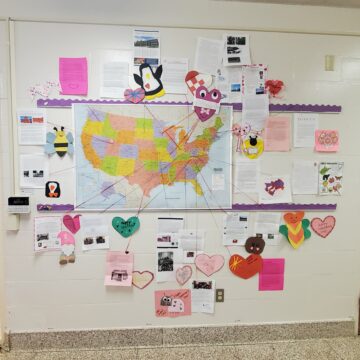 Valentine’s Day was several weeks ago, but a map depicting the places Benner Elementary School second-grade students were able to connect with is still hanging outside teacher Nicole Harris’ classroom. The tour around the country was part of a valentine’s letter exchange to connect the students to their peers from different cities and towns as far as places such as California, Colorado and Oregon.

Harris’ class penned a valentine’s exchange to more than 20 elementary classes across the U.S., and made individual valentines notes to send to classes along with their letters. In exchange, she said, the other classes also wrote back and mailed special valentines to the Benner Township class. “As we received and read each letter, we located the town (or) city of each school on a large map where we tracked all of our letters,” Harris said. “The students really enjoyed this activity, which incorporated writing, reading, art and geography.”

Harris is a member of professional groups online, and in one group, a fellow teacher has organized the exchange for several years. This, she said, was the fourth year her class has participated. With more than 750 other classes from across the country partaking in the activity, participating classes were split into smaller subgroups to make the exchange more manageable, with the intention of also creating more diverse exchanges.

The letters included information about the school, hobbies and interests, weather and more. Students said they were most surprised to learn that many students were not allowed to go outside for recess if the weather was less than 40 degrees, while other classes would go outside in temperatures as low as zero degrees. “The activity was a great way for students to see how similar and different schools, and cities (and) towns can be,” Harris said.