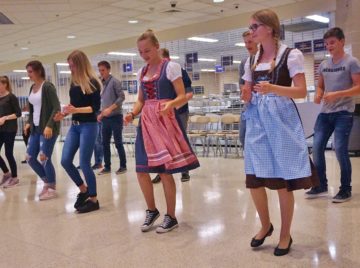 The celebration marked the 13th year of the German American Partnership Program, a cultural exchange that brings Penn Manor students and teachers together with their German peers.

This year, 12 students and two teachers from Marburg, Germany, arrived in Lancaster County Sept. 21 and will stay until Oct. 5, attending high school classes and visiting cultural sites. In June 2017, the Penn Manor students and teachers will travel to Marburg to visit with their hosts.

At the Sept. 28 dinner, participants learned about the similarities and differences between Germany and the United States, played trivia games (in German and English), and learned some traditional German dance moves.

The potluck was one of several events sponsored by the Penn Manor German Department as part of the cultural exchange. Others include field trips to Harrisburg, Hershey, Washington, D.C., and New York City, as well as local visits to such attractions as the Amish Experience.

“Cultural exchanges are now more important than ever, with the goal of bringing nations together,” said Nadine Smith, the Penn Manor German teacher who helps organize the exchanges.

The goal of the program is for Penn Manor students and families to “get acquainted with the international visitors and their culture, which not only broadens horizons but leads to intercultural understanding and openness that lasts a lifetime.”

“The German department at Penn Manor is excited to bring this great opportunity to our students,” she said.

More information on GAPP is available at: https://www.goethe.de/ins/us/en/spr/eng/gap/ueg.html