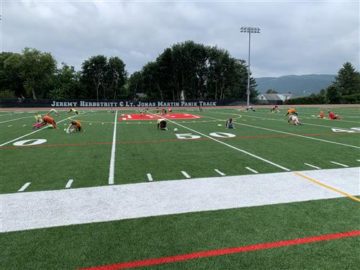 Each year, the Bellefonte Area High School girls’ soccer program partakes in a summer soccer camp to help hone skills before the season officially begins. The past two years, they attended camp at Shippensburg University that allowed them to work with college coaches and scrimmage other high school teams that attended the camp. This year, they were scheduled for a four-day camp at California University of Pennsylvania — until the university canceled summer programs.

soccer 20 According to the Cal U athletic department, “Following a directive from the Chancellor of Pennsylvania State System of Higher Education, the decision was made in late March to cancel all face-to-face events that have been scheduled during the 2020 summer months. This includes the annual summer camps hosted by the Cal U athletic programs.”

Under direction of longtime coaches Stacey Miller and Bob Litten, an in-house summer soccer camp was created instead during the week of July 20 at Rogers Stadium. It included daily workouts with trainers from Kinetik Fitness and guest coaches to work with the about-20 student athletes who signed up. Guest coaches included Chris Freidhoff, Andrew Weigold and Jonathan Virgilio who are also all teachers at the high school.

Under strict mandates from the state and athletic department, the team followed distancing guidelines and the use of face coverings. You can learn more about the Return-to-Play plan, here. The team also holds optional summer sessions on Sunday, Monday and Wednesday nights, following those same guidelines.