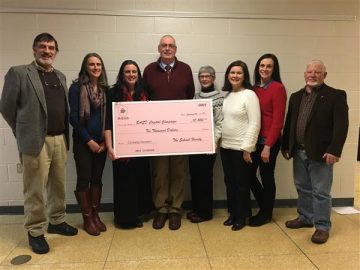 If there is a name synonymous with athletics in Bellefonte, it’s Dave Schaub.
That’s why his family donated $10,000 to the capital campaign at Bellefonte Area School District to put toward naming rights in his honor for the jumping pits at Rogers Stadium – something his four daughters said was a special place since he coached them in the jumping events while they were student-athletes on the track and field team at Bellefonte Area High School.

During his time there, he also coached U.S. Navy Lt. Jonas Panik, a Class of 1993 graduate who lost his life on Sept. 11, 2001 in the terrorist attack on the Pentagon; and Jeremy Herbstritt, a Class of 1998 graduate who was a victim of the Virginia Tech shooting in April 2007. Both were members of the track and field team at Bellefonte Area High School. The track at Rogers Stadium was recently named in their memory, thanks to a $250,000 combined donation from the Jeremy Herbstritt Foundation and Reliance Bank.

Though retired, Schaub still spent the past two years volunteering as a coach for the jumpers on the track and field team under direction of head coach Seth Miller. He also is a coach, adviser and spectator at the athletic events of his 12 grandchildren, which include basketball, golf, wrestling, football, soccer, lacrosse, baseball, gymnastics, cross country, field hockey and track and field.

“My sisters and I grew up loving our hometown and high school. The gym and the fields weren’t only our dad’s second home, but ours, as well. A date for my mom and dad included a Friday night game or even an end-of-season banquet. When we learned of the opportunity to give back to the community, my mom and my sisters and I all knew we wanted our dad’s name to be a part of the new facility. After all, he spent 42 years total coaching at Rogers Stadium,” a message from his daughters said. Those 42 years included 25 years coaching football and 17 years coaching track and field.