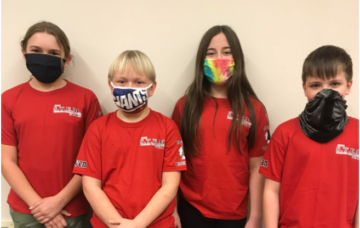 On May 14, 2021, members of Canton Elementary School STEM Design Challenge team met virtually to see who the winner of the 2021 state K’Nex STEM challenge would be. All in all, 46 teams competed at the state level. Twenty-three were in the grade 4-5 division, including Canton’s team, as they won first place in the regional challenge back on March 4, 2021.

The team was tasked with creating or rethinking a product for the home that would be cleaner, safer or more environmentally friendly. Students were asked to consider what appliances or gadgets would have been helpful in the home as we spent a lot of time there during 2020. The 2021 team came up with the “Drone Disinfector” which would be a quiet, programmed, flying drone carrying far UVC lights that could disinfect surfaces without using liquids or harmful chemicals. They created a model of their idea out of K’nex pieces and came up with a presentation that was recorded in Flipgrid to send to the judges. In addition, the team had to type up a design notebook, which included the steps and research taken to come up with the project, as well as blueprints of how to make the model.

The team had to overcome many obstacles during the year, such as meeting cancellations due to weather and going to remote learning at times. This is the sixth year Canton Elementary has had a team and the third year they have made it to states! Way to go, Warriors!