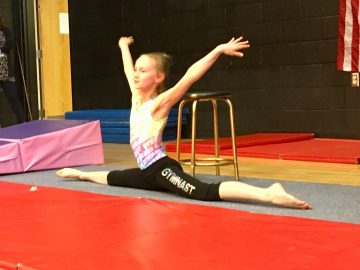 How much did the butcher charge for his venison? A buck! What do you call a pig that knows karate? Pork chop! What did the left eye say to the right eye? Something between us smells!

These were just a few of the jokes and riddles fifth-grade student Ava Boob told to an audience during her comedy act at Marion-Walker Elementary School during the school’s first-ever talent show. And if you were looking for entertainment that night and stopped by, then you got it!

The event, organized by school staff, benefited Marion-Walker mini-Thon, which is held to support the Four Diamonds fund. Mimicked after Penn State’s IFC/Panhellenic Dance Marathon, the school holds a smaller version of the event, but with the same goal – to raise money and awareness about childhood cancer. The Four Diamonds fund financially helps families affected by childhood cancer.

School counselor and event co-organizer Shelly Blair said this year’s goal was to raise $7,000.
“We are always looking for new ways to raise money,” she said. “We thought this would be a fun event for our students and their families, while raising money for a great cause that our students are so passionate about.”

It was also a lot of fun for the student participants who said they put their stage fright aside to entertain guests.
Fifth-grade students Connor Anderson and Rylan Stine teamed up to perform a three-minute dance-off with a “Star Wars”-themed battle. It started with cloaks and lightsabers, followed by a series of other popular songs. The two practiced for about three weeks leading up to the event, and said the original idea was to put on masks to hide their faces, which would help ease their nerves if no one knew who they were – but decided against it.

“Basically, it’s all about entertainment to get some laughs,” Connor said.