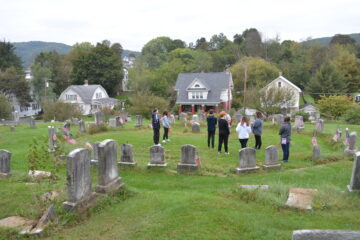 Students on a trip to Union Cemetery

Tintinnabulation is a way to describe the ringing of a bell from 1887 – the same bell in possession of Bellefonte Area High School that once was housed at its first high school in the 1880s. It was likely used to announce the beginning and end of the school day at a former high school built – and still erected – on the corner of East Bishop and Blanchard streets in Bellefonte.

Built in 1887 to accompany Bellefonte’s first school for high school students, the bell can now be found in a courtyard at the current high school on East Bishop Street. And it’s something students in history teacher Matt Maris’ class had the chance to learn about during a unit that incorporated local history and history research.

Maris teaches a class called Central Pennsylvania History that was added to the social studies curriculum this school year. He said he’s focused on providing lessons and tools for students to learn more about local history, and also include how to research that history using local resources.

In a recent unit, students studied postcards that represented the Bellefonte area, which Maris said were from 1910 to 1912. One of the postcards had an image of the old school, sometimes known as South Ward School, where the bell was first housed. “We were looking at postcards and using school postcards to help them connect to where they’re at,” Maris said. But this was just one among a plethora of lessons Maris facilitates.

He said the class started at the beginning of the school year with a unit about early inhabitants in the area including Native Americans in Pennsylvania, treaties involving William Penn and the Walking Purchase that led to the Seven Years War, also known as the French and Indian War, from 1754 to 1763. Those discussions also included information about archeological digs that can be found as close as a mile from the high school, in addition to information about former American Indian chiefs such as Chief Logan, of the Mingo tribe, and Chief Woapalanne, also known as Chief Bald Eagle, a Lenape or Delaware Native American tribal leader, who both either occupied present-day Milesburg or Mingoville.

After that, the class took a trip to the Union Cemetery in Bellefonte where they discussed the borough’s history such as its connections to Penn State. They also visited graves of veterans, and tied in the iron industry by discussing ironmasters such as the Valentines, Dunlops as well as Axe manufacturing at the Mann family plot. The iron industry was a significant part of Central Pennsylvania’s history, Maris said.

“I’m really happy and honored to teach this – it’s my favorite subject,” said Maris, who is also an accredited local historian. An upcoming lesson includes transportation history in the area with railroads, a canal system and more.

Central Pennsylvania History is a semester-long class catered to freshmen students who will also go through a recently-revamped social studies program in high school that includes other required courses such as American History, Geography and Economics, and American History Now that focuses on social issues with teacher Ed Fitzgerald.