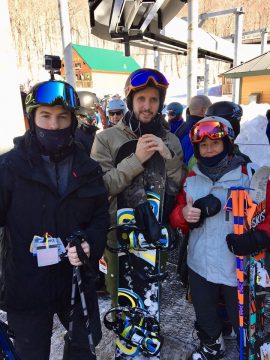 Many sports come to an end when winter begins, but members of Bellefonte Area High School’s Ski Club, sometimes known as “snow sports,” are just getting ready to hit the slopes. It is a chance for students interested in skiing or snowboarding to come together, make memories and have fun in the snow and on the mountains.

Ski Club starts each school year with an information meeting in September and winter trip signups by the end of October or early November. Generally, the first trip of the season is soon after the new year.

The club is led by two district staff advisers and run by student board members who help plan trips and point the club in the right direction for the benefit of its members. This year, there are about 70 ninth- through 12-grade students involved in the club – an increase from 54 in the 2018-19 school year and 39 the school year before that.

Advisers who enjoy Ski Club as much as the students is one of the reasons the club is successful. Co-adviser Ryan Pastva, who’s also a math teacher at the high school, has been skiing and snowboarding since elementary school.

“I started in fourth grade when one of my older cousins took me to Blue Knob for the afternoon,” he said. “She took me one more time before I was old enough to join Forest Hills Junior High Ski Club. I was hooked from that point on.”

The teacher advisers and chaperones also agree that one of the best parts of being involved in the club is getting to see students in a new environment outside of the classroom, witnessing some students learn and participate in something new, and getting to experience trips at places they may not have been able to go to otherwise.

Ski Club annually plans four trips in January and February to Tussey Mountain in Harris Township, a day trip to a nearby resort in upstate New York and a weekend trip to Vermont. They also often team up with the Snow Sports Club at Bellefonte Area Middle School to plan combined trips.