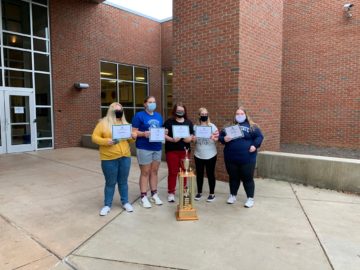 On Sept. 10, the Bellefonte Area High School Slay the Dragon team received prizes and a trophy from their tournament win last school year. Team adviser Melissa Duckworth said that due to the COVID-19 pandemic, the Centre County Youth Service Bureau was unable to hold its annual banquet, which is why YSB’s Prevention Services Director Ian Marquez stopped by the school to honor the team.

According to Duckworth, YSB is hoping to hold the competition again this school year, but are still weighing the options. BAHS has won the title for six consecutive years.

The annual trivia-style competition, sponsored by the Youth Service Bureau, was originally hosted Feb. 29 at Nittany Mall. Students who participated were given 140 questions that they must have researched from a list of sources provided by YSB. The questions address facts about drug and alcohol abuse with national and local statistics, and aim to combat myths and misconceptions. Last school year, the high school team competed against three teams from different schools and placed first. A team from Bellefonte Area Middle School placed second in the competition.