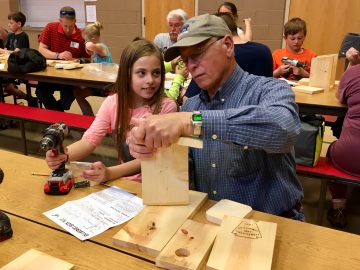 For about 20 years, Matt Burrows has brought a project to his class that has the potential to positively affect the habitat of bluebirds, while allowing students to get hands-on experience with making something using tools such as a hammer, nails, drill and screws.

The activity in May was no different.

He found inspiration to annually bring the project to his class after seeing his brother Wesley Burrows, a former teacher at Liberty-Curtin Elementary School, participate in it with his class. Matt Burrows then picked it up when he began teaching at Benner Elementary School and brought it with him when he transferred to Marion-Walker.