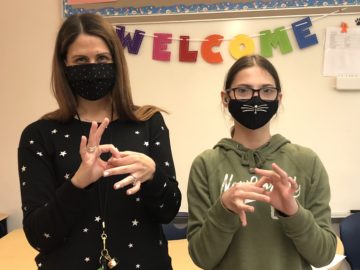 Bristol Township teachers are ensuring that every student has a caring and challenging environment in which to learn. Two Mill Creek Elementary School teachers, Eve Lubin and Michelle Petty, won the Caring Community Award from the Bucks County Intermediate Unit for their inclusivity of blind and deaf students. The award, nominated by a Bucks IU employee, recognizes individuals from the business community, industry, nonprofit agencies, retirees or school districts who have made an extraordinary contribution to the Bucks IU. In April, Lubin and Petty received award certificates and a write-up of the nominations.

Eve Lubin
Bucks IU Teacher of the Blind Olivia Dettore nominated second grade teacher Eve Lubin for the Community Caring Award. Lubin has two blind students, Daniel and Sham, in her class and Dettore is their vision teacher. Dettore says Lubin has been very flexible and motivated since the beginning. “A lot of teachers are afraid to have blind students in their class, but Eve was excited to work with them and to find ways to adapt,” said Dettore.

When class was virtual, Lubin’s students used whiteboards for their counting unit. They practiced repeated addition by creating groups of numbers on their whiteboards; however, Daniel and Sham could not use them. Lubin thought outside-the-box and purchased cookie sheets and magnets for her blind students to use. At the beginning of the school year, Lubin explained to her class that Daniel and Sham were blind, and her students were accepting from the start. “They are an amazing group of children and always want to help Daniel and Sham,” said Lubin. “I felt honored that I had the opportunity to work with Olivia, Daniel and Sham this year.”

Lubin, who is retiring at the end of school year, never taught blind students before and the experience taught her a lot. “I’ve been teaching for 35 years and this year, I learned a lot about myself and making adjustments.”

Michelle Petty
Bucks IU Teacher of the Deaf Audra Ronzano nominated fifth grade teacher Michelle Petty for the Community Caring Award. Petty has a fully deaf student, Rachael, in her class this year. Ronzano is also accompanied in the classroom by Bucks IU Educational interpreter Christy Galdi, who speaks on behalf of Rachael.

“I’ve worked with many excellent teachers over the years and have never nominated anyone else for the award,” said Ronzano. “Even with the multiple challenges doing virtual/hybrid/in-person instruction, Michelle has gone over and beyond to include Rachael, Christy and I into her classroom.”

Petty taught partially deaf students before, but this was her first time teaching a student whose first language was American Sign Language (ASL). She says the experience was very eye-opening and she learned how to over prepare. She gives Ronzano her lesson plans ahead of time so they can talk about how they can be modified.

Petty makes sure Rachael is a part of everything the class does. They have a “Sign of the Day” where Rachael teaches American Sign Language (ASL) to her classmates. Additionally, when students answer Petty in unison, they know the sign too, so they can speak and sign the choral response.

When Petty found out she won the Community Caring Award, she felt humbled. “It made me emotional to know that I really made an impact,” she said. “I always strive to be inclusive and this year, I learned that I can do more than I ever thought.”

“Every teacher who made it through this year deserves an award,” she added.