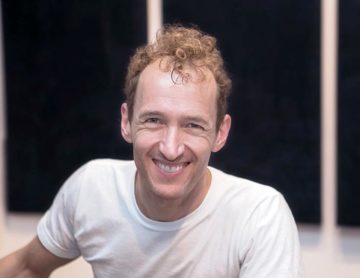 “I am appreciative of Jeffrey speaking to my students and me about his career and job responsibilities as a producer and how he relates to Truman theatre students due to so many similarities,” said Truman’s drama director Tracey Gatte. “His amazing career and what he is currently working on is such a great example of passion, hard work and communication skills, something we strive for and instill in our students in the theatre classes and after-school program. His empathy about the pandemic and sharing insight was an experience none of us will forget.”

After graduating from the University of Michigan in 1986, Seller moved to New York City where he worked as a publicist, booking agent and producer. With his business partner, Kevin McCollum, he produced three Best Musical Tony Award-winning Broadway shows: Rent, Avenue Q and In the Heights.

After working with Lin-Manuel Miranda on In the Heights, Seller produced Miranda’s newest show, Hamilton, which has gone on to receive widespread critical acclaim and commercial success. In June 2016, Hamilton received 11 Tony Awards out of a record-breaking 16 nominations, including a Best Musical win for Seller, his fourth Tony Award overall and his first since his separation from McCollum. Shortly after the debut of Hamilton, Seller directed a workshop of a musical made from Jules Feiffer’s young-adult novel, The Man in the Ceiling.

“It was honestly such an honor to sit down with Mr. Seller and have him talk to us about his experience in producing, and what brings us together at the end of the day, which is theater,” said student Lateefat Adewale. “I am very eager and excited to see what he has in store for the future.”