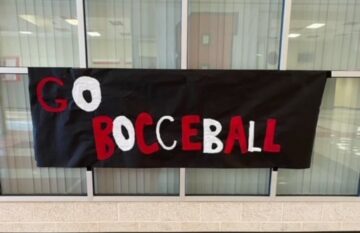 When unified bocce fans come out to support Bellefonte Area High School this season, they’ll have the chance to root for two teams. It’s something they didn’t have the opportunity to do last school year due to pandemic restrictions that prevented the team from having an official season.

District Director of Special Education Jen Butterworth, who is also the bocce coach, said that last school year the team was only able to practice and scrimmage adults and other students from Bellefonte. While it was still a lot of fun, the teams are now looking forward to competing against their counterparts from other area schools.

With increased participation and athletes who are new to the sport, Butterworth said this season’s goal is a simple one – to improve skills throughout the course of the winter season, especially with the number of new athletes. Luckily, many of the student-athletes who competed in the past have experience to bring back this year and act as role models for the rookies.

Participation increased this year from special education teacher Lisa Reitz’s students, who said they all wanted to be a part of the bocce program. There are also other student-athletes who are part of the teams, but are not served by Mrs. Reitz. There are also six general education students who have teamed up with the athletes to help as partner-players.

“When the students realize that they are participating in a real sport, it brings a real sense of pride,” Butterworth said. “They are excited to represent Bellefonte (Area) High School.”

It also comes with a lot of school and community support. Throughout January, the high school cheer program has been making posters in support of the teams that are also hung on walls around the building, in addition to decorating lockers of the bocce athletes.

The unified bocce program was first established in Bellefonte Area in the 2018-19 school year with one team. The following school year, the program increased to two teams with 17 student participants. Unified bocce is a PIAA-sponsored sport that competes during the winter season.