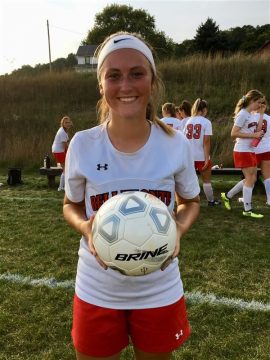 Bellefonte Area High School senior and fourth-year varsity soccer player Mal Smith hit a milestone on Sept. 11 by scoring her 100th career goal as part of the team — making her the school’s all-time leading scorer. The forward went into the game against Tyrone with 98 goals and scored Bellefonte’s first two goals of the game in the second half. Smith also had two assists on the day. The third and game-tying goal came from sophomore Kerri Shutika.