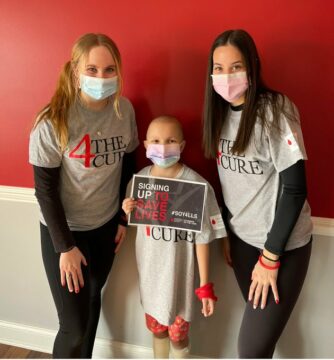 When Thomas Jefferson (TJ) High School students Emma Martinis and Olivia Supp met with the West Jefferson Hills (WJH) School Board in late January, they had a goal in mind. The TJ juniors had been nominated for the Leukemia & Lymphoma Society’s Student of the Year program and their goal was, for their team “Team 4 THE CURE,” to raise $30,000 from early February until the April 1 deadline, a period of just seven weeks.

A campaign that consumed multiple hours each day, sometimes more than eight hours, and involved outreach to more than 100 businesses and hundreds of community members ended with a spectacular finish as Team 4 THE CURE raised $82,067.17 for the Leukemia & Lymphoma Society (LLS).

“It was so surprising; it’s just crazy,” Olivia said of the fund-raising total. “We’re so grateful; the community was awesome. Everyone has been so supportive and we’re so thankful.”

“The community really helped us,” Emma echoed. “I’m so proud of how it turned out. It was great seeing the community come together.”

Among the 19 Student of the Year teams in greater Pittsburgh, they raised a cumulative total of $830,915 for LLS. Team 4 THE CURE was among the top five fundraising teams.

Emma and Olivia, who are captains on the TJ girls soccer team, had been nominated last fall by TJ senior Hailey Krawczyk, who had participated with classmate Ella Radakovich in 2021. “Olivia and I decided to apply to the Student of the Year program about one week before Scarlett was diagnosed,” Martinis said. “She soon became our ‘Why?’”

WJH students Scarlett and Garrett provide inspiration
Scarlett Rundquist is a fourth grade student at Jefferson Hills Intermediate School. She was diagnosed with leukemia last fall and the JHIS and WJH communities have rallied around her, including the TJ vs. Cancer club selling “Support for Scarlett” T-shirts, with all proceeds going to her family. Scarlett is continuing to receive treatments as of early April and Emma and Olivia visit with or text her on a regular basis.

In addition to Scarlett, Emma and Olivia also met and began a relationship with Garrett Little, a student at Gill Hall Elementary, whose leukemia is in remission. Garrett was the honorary walker/runner for the team’s Fun Run at the Montour Trail.

“They’re fun to be with and their families were so helpful,” Martinis commented. “We’ve been meeting with Scarlett every couple of weeks and will continue to do so. We met Garrett and his mom at the playground; he has so much energy and is doing great!”

“On behalf of Jefferson Hills Intermediate School, I couldn’t be prouder of our community for the way in which they genuinely embraced this campaign and united to make a positive difference, exemplifying our core values,” said JHIS principal Christopher Very.

Team 4 THE CURE lends assistance
Martinis and Supp led a team of about a dozen students and adults who comprised Team 4 THE CURE. They brainstormed, organized and promoted various fundraising events, contacted and met with businesses, sent letters and emails to neighbors and friends and went door-to-door to raise funds for LLS.

The TJ students were grateful for all the support and assistance they received from their parents (Bill and Stephanie Martinis and John and Tracy Supp) and others. “My parents were awesome, as were Emma’s parents,” Olivia stated. “I’m thankful for our parents, families and friends; the whole community,” Emma said.

Team 4 THE CURE didn’t have any corporate sponsorship as they sought to reach and eclipse their $30,000 goal. They were able to nearly triple their goal through a series of fundraising events that included launching the campaign at a TJ boys basketball game, a coin drive at JHIS (which raised more than $6,000), bracelets sold by Pleasant Hills Middle School students, a raffle event at Mulligan’s, a 2-mile walk/5K Fun Run and going door-to-door to residences and local businesses.

“For the Mulligan’s event, everyone was so supportive,” Supp stated. “We went to more than 100 businesses asking for donations – gift cards, gift baskets, whatever they could do. We spent multiple days going from business to business in downtown Pittsburgh (the event raised more than $14,000).”

The impact of giving back
Emma and Olivia both agreed that the LLS campaign had a profound impact on them and giving back to the community in the future.

“People told me it would be too much,” Supp commented. “Volunteering has been a big part of my life. It’s helped me develop character and become a better person. It was a great experience; it was rewarding in every way possible.”

“I don’t want to stop now,” Martinis reflected. “It was fun and so rewarding. I got more out of it than I thought I would. I’m going to try and get involved in something else.”