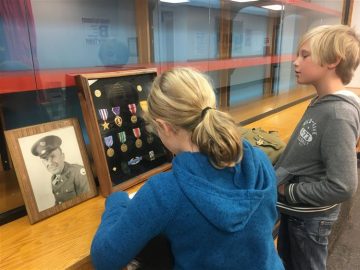 There was a unique display at Pleasant Gap Elementary School during Veterans Day that took many students on a historical journey more than 100 years ago. Fifth-grade teacher Adam Gearhart brought in old military medals, ribbons, attire and more, including a uniform his great-grandfather Harry Hicks wore during World War I when he was an infantryman in the U.S. Army.

The display also included medals his grandfather was given for his service in World War II as a corporal in the U.S. Army while deployed in Africa and Germany. His grandfather, James Leroy Weyer, received the Silver Star and Purple Heart.